“I’d love to hear the rest of your stories,”

said Al Roker during a recent interview with Howie Franklin on the Today Show.

Please pass on to Howie, "how much I enjoyed reading his book"! I think he really nailed it! So proud of Howie,
and blessed to have worked along side him a few times. I was always impressed by the way he could handle
situations under pressure! I learned a lot from him, and always enjoyed my moments with him. Give him my very best!

Years of experience aboard Air Force One and managing an airport has made Howie an entertaining speaker and an expert on creating prosperity and outstanding customer service at a General Aviation airport. 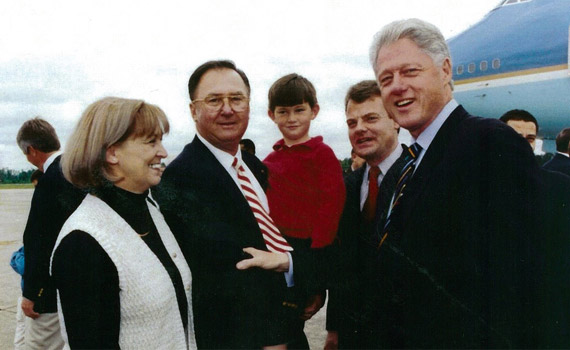 Former press secretary to Ronald Reagan and George Bush, Marlin Fitzwater, said, “Howie knows all of your inner secrets (on Air Force One), when you can’t take the pressure, when you’re tired and crying and sleeping on the floor. . .The perception on the outside is always different from the inside.”

When he was promoted to the crew of Air Force One in 1976, it was on the tail end of the Ford administration. He was told not to get attached – a change in presidents could mean a switch in crew.

But “he survived a lot of administrations because he gave good service with a smile, he was dedicated and trustworthy, he did his job without criticism and without complaint,” says Marlin Fitzwater who traveled on Air Force One for the better part of 10 years.

Fitzwater says it’s rare for someone to work on Air Force One and never step on toes: “When traveling with such close proximity to a bunch of egos, it is pretty easy to get crossways with somebody. Howie never did.” Simply put, “Howie was a joy to be around.”

Howie’s pre-teenage years were spent at Ocean Beach, Fire Island. He remembers it as a wonderful time when he was surrounded by and it was common for him to see Marilyn Monroe, Joe DiMaggio (who he also met later on Air Force One), Mike Wallace and Buff Todd, Dave Garroway and many others. He learned a startling fact, famous people were just human.

The son of a New York-area marina and deli owner, Franklin enlisted in the Air Force at age 20 with a single aspiration: to see the world. It’s easier for him to name the places he hasn’t been rather than reel off an exhaustive list of journeys. Maybe some small countries in central Africa.

He began in 1965 preparing meals for B-52 flight crews in Guam. At various career stops, he cooked for and served generals, secretaries of defense, secretaries of state, and heads of state.

Howie is the only Flight Steward who worked for five US Presidents: Presidents Ford, Carter, Reagan, Bush and Clinton. He also flew extensively with Dr. Kissinger, Secretary of State, on his Shuttle Diplomacy Missions during the Nixon and Ford administrations.

Howie spent 29 years in the United States Air Force, reached the rank of Chief Master Sergeant, 24 years at Andrews Air Force Base in Special Missions Operations, including 18 years on Air Force One. Howie has over 300 stories of his memories of working around Presidents, First Ladies, Vice Presidents, Cabinet Secretaries, VIP guests and U.S. press corps.

Currently, Howie serves as Member and Past President of the North Carolina Aviation Association, serves on the Executive Board of Directors of the future Air Force One Museum, serves as Chairman of the Economic Development Committee of the Southport-Oak Island Chamber of Commerce, formerly on the Board of Directors of Communities in Schools, and is the Director of Brunswick County Airport in southeastern North Carolina, the last place, going north, on the east coast where palm trees grow wild. The airport was coined by the Atlantic Flyer periodical, “The Little Airport with the Big Heart.”

Howie was fantastic!! His material was extremely interesting, his delivery funny but respectful, and his manner very engaging. I've received nothing but enthusiastic positive responses.

Howie Franklin was a huge success. Comments from the group were all very favorable. He was willing to do anything we wanted. I escorted him around our "Table Fair" and introduced him to attendees as we went. He made a wonderful impression on everyone; he was so personable and friendly. He ran a little over, but no one left their seat.

Before we left for the luncheon, he greeted attendees at the door as we waited for our driver. All the comments to him at that time were "wonderful presentation" "I truly enjoyed your talk" "You were wonderful" "You were the best speaker I have ever heard". At the luncheon Q&A he answered every question until there were no more asked.

He was one of the easiest performers we have dealt with and was a gentleman. Trumbull Town Hall highly recommends him to any organization that is interested in having an interesting, captivating, humorous speaker.

I finished it yesterday. Thoroughly enjoyed every page!!!!! Howie's kindness shone through every story!

Great Book, good reading, I suggest everyone on Oak Island own one 🙂

Excellent book, I enjoyed reading it more than you will ever know. Do another one!